Urinary Tract infection (UTI) is a very common infectious disease occurs commonly in aged women. As age goes up there will be structural changes happening in kidney. Muscles in the bladder, urethra and ureter become weaken. Urinary retention gets increased in the bladder and this creates an environment for bacterial growth.

Infection can happen in any part of the urinary tract – kidney, ureter, bladder or urethra. It is called as Cystitis, Urethritis and Pyelonephritis based on the site.

Patients may complain of one or multiple symptoms which include fever, dysuria, hematuria, incontinence, decreased urine output, pain in abdomen or back, nausea, vomiting or diarrhea. Physician does a thorough physical examination and takes clinical history of the patient. Urinalysis and urine culture are the lab tests used to confirm UTI.

UTI ICD 10 codes and guidelines for UTI can be found in chapter 14 of ICD-10-CM manual which is “diseases of the genitourinary system”, code range N00-N99 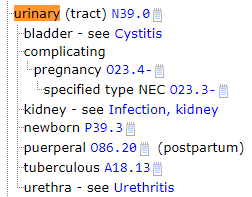 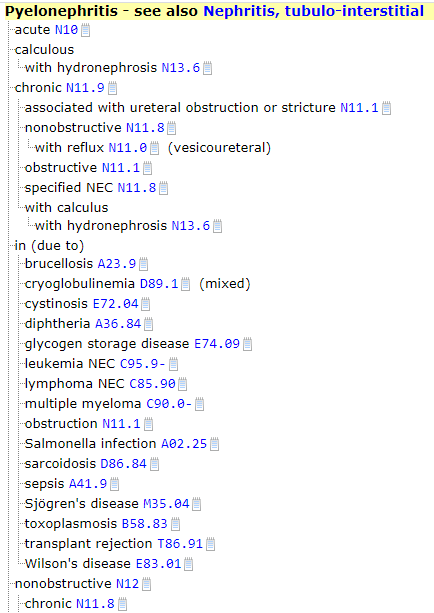 Below examples will help us understanding how to code UTI.

65-year-old Mary visits clinic with fever, dysuria, tachycardia and altered mental status from past one week. Her examination found an indwelling Foley catheter, but patient is unable to remember the reason for placing this catheter. Catheter was removed and sent for culture. Blood tests and urine tests were also ordered apart from this. Patient is admitted for further evaluation. Her discharge diagnoses are:

E.Coli sepsis due to UTI, E.Coli UTI due to indwelling catheter.

T83.511A – Infection due to indwelling catheter

Note: Category T83.5 has note to use additional code to identify infection. Here, complication code should be coded primary followed by sepsis.

Jennifer is a 20-year-old student presents to clinic for urinary frequency, dysuria and suprapubic pain started 2 weeks ago. She has a history of UTI 2 years back. She is sexually active, but states that she finds it uncomfortable. She feels burning sensation when urinating. She takes 3-4 glasses of water in a day. Physical examination documented tenderness in the suprapubic region and anterior vaginal wall. Urine culture is done for further investigation. Physician has mentioned “cystitis” in the final assessment.

Note : Not coded UTI (N39.0) as there is site specific diagnosis cystitis is mentioned.

Andrea is a 50-year-old woman coming to emergency room for pain when urinating and burning sensation. She does feel lower back pain from 3 weeks. She never had any urinary problems earlier. She is a diabetic patient and takes insulin daily. Physical examination shows abdominal tenderness. Pelvic examination is normal. No signs of vaginitis or cervicitis found. Urinalysis is done based on the examination. After reviewing the results the case was diagnosed as UTI.