In this topic will learn about anxiety disorder, classification, Anxiety ICD 10 Codes along with descriptions and examples.

What is an anxiety disorder?

While anxiety is a normal human emotion, an anxiety disorder is a psychiatric disorder characterized by regular or frequent feelings of restlessness, worry, tension, rapid heartbeat or phobias which can cause disruption in the everyday life of the individual. This is a very common emotional disorder affecting all age groups. Studies suggest that women are likely to be diagnosed with anxiety disorders more than men. 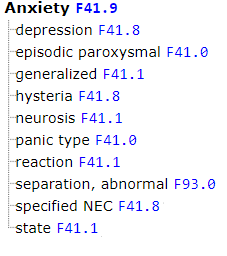 8. Phobia – A type of anxiety disorder characterized by irrational fear, rapid heartbeat, shortness of breath, trembling and a strong desire to get away. 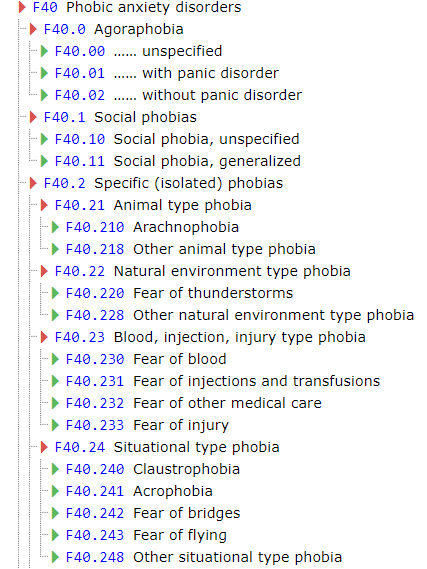 Greg, a 22-year-old male came to the hospital after a panic attack because he was locked in a room by his friends. The doctor diagnosed him with claustrophobia. Assign the appropriate code for the diagnosis.

Anxiety associated with other mental disorders.

1. Alcohol abuse with alcohol-induced anxiety disorder – Change in neurotransmitter levels in the brain due to influence of alcohol can cause anxiety that can last for several hours.

This is a 40-year-old female who was seen around City mall, with complaints of chest tightness and shortness of breath. She was seen crying uncontrollably and was picked up by EMS and brought to the ED for assessment. Upon arrival the patient states that she drank one glass of Whiskey this morning. A comprehensive psychiatric evaluation was conducted during which, a detailed personal history of development, life events, emotions, behaviors, and stressful events were obtained. Two stressful events are that her husband left her for another woman and her mother became severely ill with Parkinson’s dementia. She became the caregiver for her mother while dealing with the separation from her husband.

Final diagnoses: Alcohol abuse, alcohol-induced anxiety disorder. What is the proper diagnosis coding for this scenario?

This is a 30-year-old female visiting the Doctor’s office today with continued complaints of uncontrolled anxiety. She was recently diagnosed with adjustment disorder with anxiety due to death of her parents in an accident last year and being fired recently from her job. She has since noticed long periods of restlessness, feeling overwhelmed, and difficulty concentrating, with occasional chest pain and excessive sweating, which interferes with her daily life. A physical and psychological assessment was performed. Anti-anxiety medication was adjusted, and the patient was encouraged to continue psychotherapy sessions.

Final diagnosis: Adjustment disorder with anxiety. What is the proper diagnosis coding for this scenario?

Mr. Peter is being treated by his physician for frequent nightmares for past 6 months. He was better but for the past few days again his condition worsened and is he is now too anxious. He is diagnosed with Dream anxiety disorder. What ICD-10-CM code(s) is/are assigned?

A patient is admitted with amphetamine dependence and has been diagnosed with stimulant induced anxiety disorder. Assign the correct ICD code for the diagnosis.